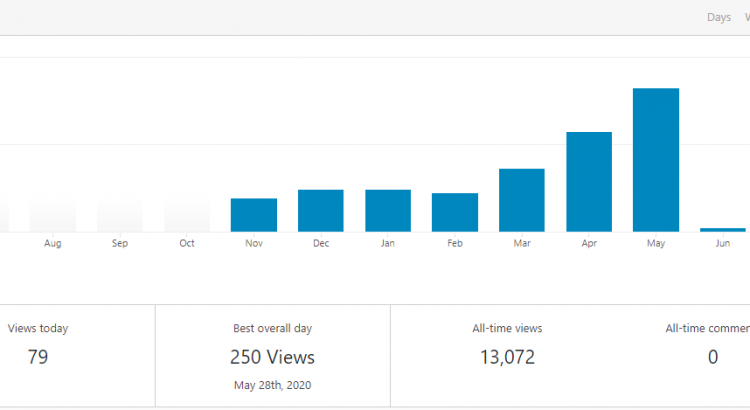 A year ago I started blogging consistently at about a weekly pace. The result, 61 unique posts, most recently 4000 monthly views and the opportunity to co-author a book.

In this post I wanted to review this year in blogging, and share what I learnt. And I hope this motivates you to start blogging as well. It’s a great way to broadcast the work you are doing, and a good way to learn new things as well.

What a year of blogging has taught me

A year of blogging has certainly taught me a number of things, both about the writing process as well as about what to expect from a blog post.

I have tuned my writing process over time. Initially when I prepared a blog post, I would start off by exploring the tech, setting up a demo and then finally start writing. This often lead to me rebuilding the demo that I had built to capture better screenshots, or even to revisit a step for more details. I changed that process to start writing as early as possible in the exploration process. This has improved the process in itself, although right now I often go back to things I wrote early in the post to edit them by learnings I had by the end.

One of the things about the writing process I also learned is that I have a finish a post as soon as I start writing. There’s a number of blog posts that I still have in draft, months after having started them. I might finish them, I might not, but one thing that is for sure: I now reserve a bit more time when I’m writing a post to make sure I finish it quickly.

Of the posts get published, a lot go unnoticed, with limited traffic and with almost no social amplification. Although I hate to admit it, but seeing views come in on new blog posts give a dopamine boost, and it’s certainly nice to see content be appreciated.

While a lot of posts go unnoticed, the process itself doesn’t go unnoticed. I have this one fond memory of a Microsoft internal event where I was a training coach in September (3 months after starting the habit). While doing introductions, I said my name and one of the attendees at the table said: “Oh, don’t you have a blog?” – “Yes, I try to post about weekly.” – “Oh nice. I’ve read some of your content. It’s exactly what I like to read, keep it up man!”. This is a very fond memory, and ever since I’m met more people who gave me a pat on the back and congratulated the work and the content.

Also, links to blog posts end up in the weirdest places. I was able to track this due to some of the stats (more on this later in this post). Apparently, my post about failing the LFCE exam is part of somebodies learning resources for the LFCE exam.

Where do you find the time?

A question I get asked sometimes is where I find the time to write these blogs. Now, there’s isn’t a single answer to this that question. If I think about most of my posts, they are mainly written with the following purpose:

In terms of actual time, most of these posts are written outside of working hours. On average – and this a rough estimate – it takes about 2 hours to draft, write and review a post. Some posts take a lot longer (my CKAD series took more than 2 hours per post), while some others take a whole lot less.

The truth is in the numbers. I am currently using JetPack, a WordPress plug-in that monitors visitors and views. Sadly, I only turned it on in November.

The graph below shows the all-time number of visitors. There’s a huge increase starting in March, which led to a total of 4,000 views in May alone. Let this be a lesson: consistency is key!

In terms of most popular post, my post on WSL2, Windows Terminal and Oh-my-zsh is by far the most popular. That caught be a little by surprise initially, because it’s not the main topic of my blog (which is focused mainly on all things Azure, Kubernetes and DevOps). However, given WSL2 targets a broad audience, I understand why that post is the most popular.

There a whole lot of posts which only have single or double digits views.

In terms of traffic sources, most of my traffic is coming from search engines. That in itself is very motivating, because it means the content is discovered organically. Other than that, LinkedIn and Twitter are major sources of traffic, with LinkedIn working double as well for me compared to Twitter.

Oh, and if you look at the traffic sources above, I have to say I didn’t know bing and duckduckgo were that popular 😂.

This has been a great year of blogging, and I’m not planning to stop anytime soon. It’s a great vehicle to drive my own personal development, and to help out the larger community. I hope this post motivates you to start writing as well, since it’s a great way to broadcast the great work you are doing.