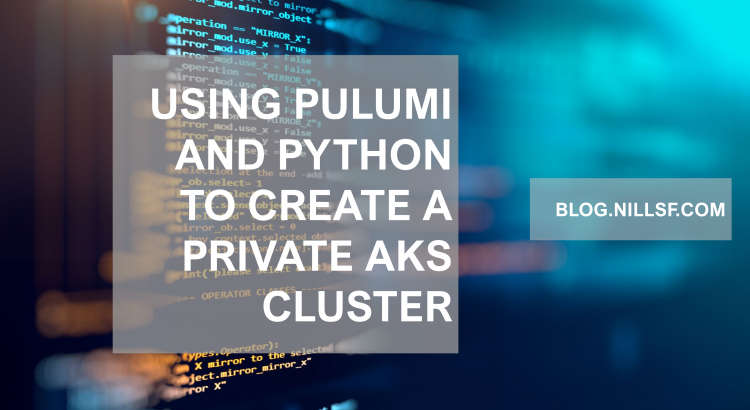 Pulumi is a somewhat new kid on the infrastructure-as-code block. I’ve been looking for an opportunity to work with Pulumi for a while, and a recent customer engagement caused me to investigate it in a bit more detail. This led me to create this post, exploring how to create a private AKS cluster and a VM to connect to it using Pulumi.

In this blog post, I’ll start with introducing the Pulumi tool, explain how to install it, then walk through the quickstart experience, and finally how to use it to create a private AKS cluster.

As I finished this example, I had a couple of thoughts about Pulumi:

In this blog post, I’ll be using Pulumi and Python to create a private AKS cluster. There are two code samples on GitHub associated with this blog post:

And with that, let’s get started!

Pulumi is an infrastructure as code (IaC) tool. It serves the same function as ARM templates, Bicep, or Terraform.

Pulumi is different in that it uses regular programming languages as the language to define your infrastructure (TypeScript, JavaScript, Python, Go, and .NET). An Azure ARM template uses JSON while Bicep and Terraform use a domain-specific language (DSL). Pulumi’s approach has the advantage that you can use all the native language operations around your infrastructure and don’t have to learn a new language for certain functions (for those who have written an ARM template, you know how difficult it can be to do string concatenation or refer to the id of a resource).

This makes it easy to create logic around your infrastructure. For example, an if-statement or a for-loop can use the built-in ways to do so in the language you’re using.

Yet another tool, so this begs the question: “Which IaC tool should I use (for Azure)?”. I don’t have a straight-up answer for you, as it depends. If you have existing experience with Terraform or Pulumi working with another cloud, use what you’re familiar with. If you don’t have experience with either, I would suggest starting with using either ARM templates or Bicep. These are the Azure native solutions, are supported by Microsoft, and will have day-one support for most features in Azure.

Next up: installing Pulumi:

I will be installing on WSL running Ubuntu. For the full installation guide or how to install it on different platforms, please refer to the Pulumi documentation.

Installing Pulumi is as easy as running the following command:

This worked great in my case, and installed Pulumi without requiring root access and added itself to the path in my .zshrc file.

I opened a new WSL terminal and was able to run the Pulumi CLI.

Pulumi uses the online Pulumi service to deliver its end-to-end experience. You will need an account from their service to use Pulumi. Go to https://app.pulumi.com/ and create an account. I linked it to my GitHub account.

Now, login to their CLI to get started. To do so, run:

You can hit enter to get an interactive login screen like I did:

The login was easy enough. However, I don’t know how I feel about the requirement of using the online service to get the tool to work. It feels like a forced way to push you towards using the paid version once you graduate from single-user to team.

Before creating the actual AKS cluster, let’s go through the quickstart experience. This is using the example from the Pulumi documentation.

First: credentials. Pulumi can either use your user credentials or a service principal. In my case, I’ll be using my own credentials. To access those, Pulumi uses the token stored by the Azure CLI. If you aren’t logged in using the Azure CLI, you can do so using:

Next, make sure you have Python, pip and python-venv installed if you wish to use Pulumi with Python:

This will take you through a wizard to create the project, after which you’ll have a simple scaffold available in your directory:

This also registers the project with the online service:

As you can see, this picked up on the git repo this project got created in.

The wizard created a number of files locally:

The two YAML files in the directory are used for defining the project and configuration data for the stack. This is the content of those files:

The actual infrastructure as code is contained in the __main__.py file, which contained the following code to start with:

This was easy enough. To delete the resources, you can use:

Which will tear down the resources that Pulumi created for you.

And with that, we’re ready to have a look at how to have Pulumi create a Private AKS cluster.

To create a Private AKS cluster, we’ll have to get Pulumi to create the following resources:

To start, I created a new project using:

And then started editing __main.py__. I put all the code for the private AKS cluster and the VM in a single Python file (I don’t know what the best practices are from a Pulumi perspective). Let me walk you through all the different resources in that file:

To start, there’s a couple of imports and a number of variables I have set:

Next up is the network security group. This is where I noticed some of the complexities around Pulumi. Let me first share the code itself:

Most of the arguments in the constructor are strings. However, the security rules aren’t a string or a JSON object, they’re a custom object that needs to be constructed (SecurityRuleArgs in this case). You’ll see throughout this sample that Pulumi frequently uses these custom objects, instead of a simple string. It’s not a big issue once you get used to it (and have IntelliSense setup in VS Code), but it did slow me down a bit.

Next up, creating the VNET and the subnets. Here is where you have two options:

I chose to use the second approach because it is easier to reference the individual subnets that way once you link them to either the cluster or the VM. You have to pick either strategy, you cannot combine both strategies as this would cause conflicts.

You’ll also notice that the VM subnet gets linked to the NSG that was created earlier:

Those are some of the important callouts. Below is the full Python Pulumi code:

For the virtual machine, I needed to create a public IP, a NIC, and then the machine itself. Again, there’s a decent amount of configuration in the VM object, as you can see in the code below:

Creating the stack is as easy as running:

The Pulumi web service also maintains a history of your deployments. In my case, you can see how I added resources and made updates to the infrastructure:

The messages you see next to the update numbers are my git commit messages. Pulumi is actually pretty smart and reads git metadata to learn more about the context of the deployment. As you integrate your infrastructure as code runs with a git repo and a pipeline, I can see this be super useful!

Deploying the entire stack took a little less than 10 minutes to complete. Once complete, I connected to the cluster to prove everything worked fine:

Connecting to the cluster

To prove out everything worked fine, I connected to the VM on its public IP (all created using Pulumi), installed the azure CLI, installed kubectl, logged into azure, got the AKS credentials, and finally connected to the cluster. It all worked well:

And the final command showed that I could connect to this new cluster:

And this shows that I was able to use Pulumi to create a private AKS cluster, a VM, and was able to connect to the private cluster from that VM.

In this blog post, I showed you how to create a private AKS cluster and a VM to connect to it using Pulumi. Pulumi is an infrastructure as code tool that leverages general-purpose programming languages to deploy infrastructure.

I shared my thoughts in the introduction of this post. The Pulumi tooling is fantastic. The installation process was flawless, the CLI is beautiful and the web service (although I have some reservations as to why it’s required) has a lot of valuable insights. The one area that slowed me down a bit was finding the right names for all the custom objects required, rather than simple strings in Terraform.