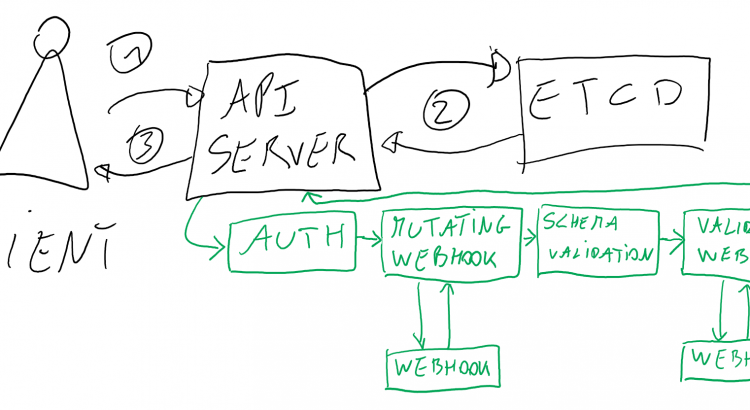 In this post, we’ll handle the following topics in order:

What are admission controllers

There are two types of admission controllers:

Although not used in this blog post, the Open Policy Agent (OPA) is a popular open-source project that uses these admission controllers to make implementing policy on Kubernetes easier. Rather than having to write your own webhooks to implement your policies, with OPA you can define your policies and submit those to OPA. For more info on OPA, either check out their website or check out this CNCF webinar.

How do admission controllers work

In that webinar, you’ll not only learn about OPA, but you’ll also learn how admission controllers work. I like how Gunjan Patel explains this in detail in that webinar. Let me try to summarize how they work:

When you make a request to the Kubernetes API server (1), the first job is for Kubernetes to commit the requested state of that request in the control plane (2), specifically in etcd (etcd is the database kubernetes uses in the control plane). Once the state is committed to etcd, you get a success message back (3). The scheduler and controller managers will then get to work and attempt to deploy your desired state to the cluster.

In between step (1) and (2) is where kubernetes does a number of steps to validate the request itself. It checks if the user making the request is authorized to make the request, calls out to mutating webhooks, does schema validation and then checks against a validating webhook. Only if all these steps complete will the request be accepted and be persisted into etcd. This is where admission controllers come in.

The webhook themselves can be hosted anywhere. It’s typical to see them hosted inside the cluster itself (what I’m doing here as well), but you can host them outside the cluster on e.g. an Azure Function or AWS Lambda as well.

That’s a little on how these admission controllers work. Let’s have a look at what it takes to set them up:

How to deploy an admission controller on a Kubernetes cluster

Credit where credit is due, I used this excellent blog as a starting place. However, in my case, I needed a couple of extra things since I’m interfacing with the API-server as well to get nodes and see if pods can be scheduled. All in all, to get the mutating admission webhook to work, I am creating the following:

Let’s walk through the different elements and how you could deploy those by yourself.

The web app is a little more involved. The first piece is TLS. The webhooks in Kubernetes require TLS to work. I used a self-signed certificate for this. To create the cert, use the following command:

In Kubernetes, you’ll need base64 versions of the certificate and the key, to get those, run the following command:

And then create a secret in Kubernetes using those base64 strings as values:

That’s how to create the secret for the TLS certificate. Next up, is creating the deployment for the webapp. I won’t go into depth on the code in the container (potential for another blog post). In the deployment, there are two pieces to have a look at:

Finally, we’ll be exposing this deployment using a service. The service will be used by the admission controller later to send traffic to:

And that’s the webapp part. Now up to the actual admission controller:

The final piece to this puzzle is the actual admission controller. As you can see from the definition below, you see that we refer to our test-mutations service on the exposed port. We configure the admission controller to send all pod create requests to the service.

Let me show you this in action. As I mentioned, the code of the admission controller itself is outside of the scope of this blog post, but let me show you what the effects look like.

Let’s have a look at the admission controller in action. Before doing this, let’s review what it does:

The admission controller logs to stdout, which allows us to see when it gets triggered. Let’s setup a tail/follow on the logs:

As you can see, for now, there are (almost) no logs, since we haven’t created any pods. For this test, I have a deployment that creates an Nginx pod with certain memory and cpu requests, but without the virtual kubelet toleration:

If we create this, we can see we now have one pod, hosted on a real node.

What’s more, we can also see that this triggered our admission webhook and we see an entry in the logs.

There’s some more verbose logging in the system that you can safely ignore.

We can now scale out the deployment to saturate the physical nodes.

And if we were to check the YAML definition of those pods, none of these have the toleration for the virtual kubelet set.

If we keep scaling out however, we would exhaust the cluster capacity and new pods would be scheduled on virtual kubelet nodes.

If we check the logs of the admission controller pod, we will see that it added the toleration:

And if we check the toleration on the new pod, we’ll see that the virtual kubelet toleration is present:

That toleration is not part of the deployment but was set dynamically by the mutating webhook, because the pod couldn’t be scheduled on the cluster anymore. That’s exactly what we wanted to achieve.

In this blog post we explored what it takes to set up a mutating admission webhook in Kubernetes. We explored this very practically with an example of a mutating webhook running. We showed that this mutating webhook can add a toleration to pods, based on information from the cluster itself.